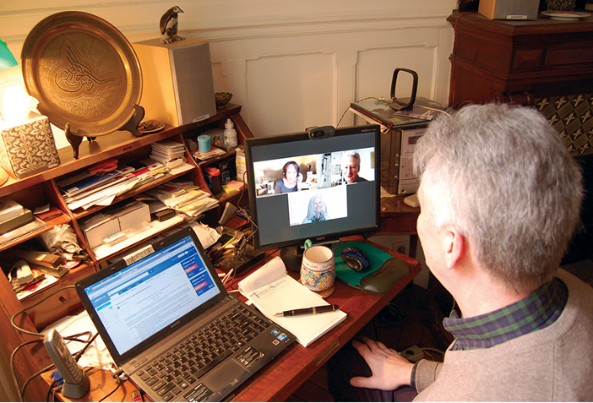 William Jordan at his computer in Paris, holds a virtual meeting with his Association of American Residents Overseas team to discuss the most recent Smart Traveler Enrollment Program (STEP) message from US Embassy Paris.

On the morning of March 12, big news hit Paris, where I’ve lived since retiring from the Foreign Service in 2011. A few hours earlier, President Trump had announced from the Oval Office a ban on all travel to the United States from the European countries in the Schengen Area.

As France and other European Union states were still struggling to follow Italy’s lead in ordering lockdowns of the population, it was a bolt out of the blue, and stunning both in its lack of nuance and absence of detail.

A number of questions struck me: Were American citizens now banned from returning to their own country? When is this ban going into effect? Swirling in my head were visions of thousands of panic-stricken tourists and long-standing residents in France streaming to the airports to get home, whatever the cost. (That is exactly what happened.)

During my Foreign Service career, I had been a political officer. My first assignment, however, was as a vice consul in Saudi Arabia, and it marked me indelibly, especially realizing that, almost every day and even in small ways, my actions could dramatically affect someone else’s life.

This same spirit led me two years ago to join the Association of Americans Resident Overseas, a nonprofit organization based in Paris that advocates on behalf of American citizens living abroad. With a paid membership of just over 1,000 in 41 countries, AARO focuses on taxation, voting and citizenship issues. On the board, I would serve as a liaison with the State Department regarding consular services.

I immediately queried the consul general in Paris as to what was going on. He responded that the president’s announcement had caught everyone by surprise, and that the embassy was still waiting for official instructions. Informally, however, he stressed that American citizens, legal permanent residents and their legal dependents would be allowed to travel to the United States. He asked me, as he would other American organizations in France, to spread the word through our respective channels.

With that mission, I contacted Christine Cathrine, AARO’s invaluable office manager, and Pam Combastet, AARO’s secretary and informal liaison to many of the other American organizations in Paris, and proposed that AARO set up a crisis communications task force. The task force would prepare and send out urgent messages to our members, asking them to share the information with other Americans, including visitors. We also urged those who had not done so to register with the State Department’s Smart Traveler Enrollment Program.

Per the “confinement” order in place throughout France, we hunkered down and adapted to operating virtually. AARO has sponsored webinars dealing with tax issues, like the implications of the CARES (Coronavirus Aid, Relief, and Economic Security) Act. And we continue to send out “warden” messages, sharing information from the embassy and providing updated information on travel restrictions, the executive order suspending immigration visas, and the most recent caution to Americans overseas about how COVID-19 might affect their ability to vote by absentee ballot, to name a few. Emulating our consular colleagues, AARO members are Americans helping Americans abroad.

Retired FSO William Jordan was a political officer for 30 years, mostly working on the Middle East and North Africa. He resides in Paris and, in May 2020, became president of the Association of Americans Resident Overseas (AARO).

AARO thanks the Foreign Service Journal for allowing us to reprint this article in its entirety.