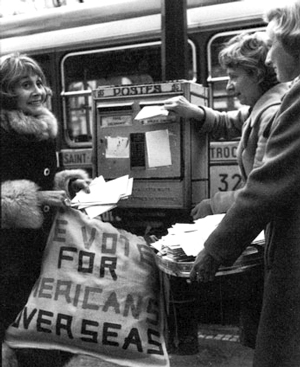 In 1973 the Bipartisan Committee on Absentee Voting, founded in Paris by prominent members of the American community, was able to introduce a bill in Congress by Senator Charles McC. Mathias, Jr. (R-MD). The bill sought to abolish domicile and residence requirements as pre-conditions for absentee voting in federal elections.

At that time local, county and state officials determined procedures for absentee voter registration. For example, the state of New York would not issue an absentee ballot unless state income tax had been paid – even if your last residence was in Minnesota.

By September 1975 the bill was still wending its way through the legislative process – committees, hearings, verifications, more hearings – but never coming to a vote. Several former ambassadors, including Charles Bohlen, Arhtur Goldberg, Averill Harriman and George H. W. Bush, had testified on behalf of the bill.

Yet the Justice department, suspicious of voter fraud, came out against it. A legal counsel to the Deputy Assistant Attorney General, Antonin Scalia (later named to the Supreme Court by Ronald Reagan), held that it basically seemed unfair to permit a person who might have no knowledge or interest in the state in which he was formally domiciled to cast votes in that state.

Joining forces with the Bipartisan committee, AARO was able to use the administrative facilities of the American Chamber of Commerce in France. It thus became possible to coordinate a grassroots letter writing campaign, working with FAWCO clubs, veterans groups alumni associations, schools, churches, and just about any American organization that could be located. We could reach individuals all over Europe and beyond. But generating letters was not easy. Many people had never even tried to vote. They were unsure of their congresssional district or the name of their congressmen. They needed the name and the number of the bill. What to say? What mailing address and terms to use? All of these questions discouraged action. (Obviously, the generalized use of email, photocopiers and computers had not yet arrived).

During the fall of 1975, a former president of FAWCO, Sonja Minçbère, came often to the Chamber of Commerce to keep our paperwork moving. In the afternoon we would have our cup of tea, usually discussing how to get more people to write more letters to more congressmen. And then one day, suddenly, Sonja picked up her tea bag, waved it around and said "Tea Party, Boston!" She had found the solution.

It was simple, direct, and catchy. We wrote a brief message on AARO stationary:

In 1773 there was a tea party in Boston Harbor because of no representation.

In 1975, we mail you this tea bag because of the Overseas Voters Rights Act,

A short coverletter was prepared, telling the addressees to staple a tea bag to the letter and mail it to their congressmen. All we had to do then was to send one copy to everyone on our mailing list, counting on them to copy and distribute as many as possible. And so they did.

By December 1975, the Reconcilation Bill had passed the House 374 to 43. The Chairman of the House Administration Committee stated that the mail received in his office on behalf of this legislation had exceeded by five or six times the amount that had come in on any other issue during the year.

But opposition by the Justice Department continued, still led by Antonin Scalia, who had persuaded the Attorney General to oppose the President's signature. The representative of the bipartisan committee, Gene Marans, decided to go over the head of the Justice Department. He asked Sen. Barry Goldwater to call the legal counsel of President Gerald Ford.

Senator Goldwater's message to the White House was: "Listen you ___ fools! There are more Republicans in Paris than there are in Detroit! And Ford doesn't want to be the first President to veto a voting rights bill since the Reconstruction."

The bill was signed by the President on January 2, 1976. Direct political life had begun for Americans living overseas.