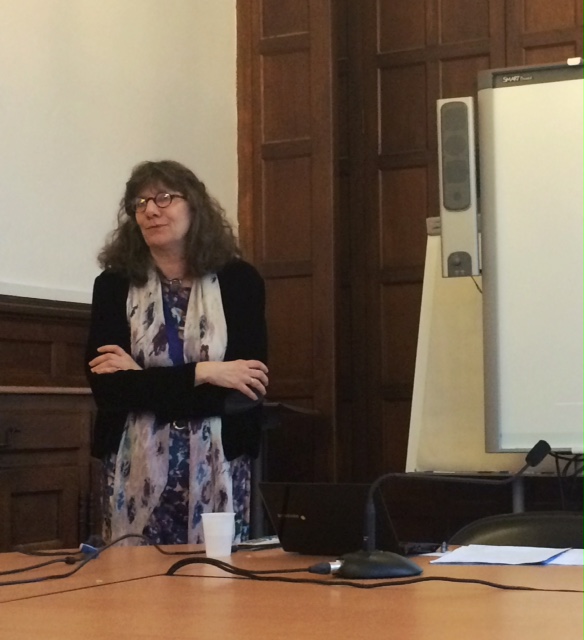 Nancy L. Green, professor of history at the Ecole des Hautes Etudes en Sciences Sociales, joined us at Reid Hall on Wednesday, April 8 to talk about some of the “lesser known” Americans in Paris, as described in her book The Other Americans In Paris: Businessmen, Countesses, Wayward Youth, 1880-1941.

When many of us think of Americans in Paris, our minds immediately tend to settle on Hemingway and Fitzgerald, Josephine Baker and Gertrude Stein. But, as Nancy explained, there was a whole group of “other” Americans, ten times more numerous and in many ways more influential than the Left Bank Americans of the so-called Lost Generation.

Who were these early expats of Paris’s Right Bank? Some were heiresses who had come to Europe to find less wealthy aristocratic men to marry for a title of duchess or countess. Others came to have fine dresses made. Some settled in and led very active lives, organizing music festivals (Gertrude Moulton) or founding organizations such as the Paris chapter of the Daughters of the American Revolution (Tryphosa Bates Batcheller).

Businessmen came over to sell American goods, products ranging from Stetson hats to refrigerators and typewriters. They founded the American Chamber of Commerce, which lobbied both in France and in the United States for better trade agreements and to improve the process of founding American businesses in France. Women also worked; American women were notably influential in the democratization of libraries in France.

There was also an important community of African Americans in Paris. Nancy cited the interesting example of Eugene Bullard who was a World War I pilot in the French military (as black men were not at the time allowed as pilots in the American military), and later went on to found a cabaret in Montmartre as well as a fitness club.

After the First World War, some American soldiers stayed in France with the French wives they met while in the service. Many of these marriages worked well; some did not. Nancy told us of finding evidence in consular archives of French women searching for their American husbands who seemed to have disappeared to the other side of the Atlantic, and vice versa.

The Right Bank Americans founded many of the cultural institutions still present in Paris today. They started American newspapers: what would become the New York Herald Tribune, and later the International New York Times. They also founded their own places of worship and religious institutions. Reid Hall itself was founded as a residence for girls, to provide them a good, wholesome environment in which to live and study.

The onset of World War II marked a pause in American commercial and cultural presence in Paris, but as we know very well, Americans would continue to be drawn to Paris, and in even greater numbers, in the second half of the century.

Available for purchase on the website of the publisher.