On Monday, May 4, 2015, AARO’s Annual General Meeting was held in the organization’s new home in the historic Reid Hall in the 6th arrondissement of Paris. AARO president Lucy Laederich opened the business meeting at 6:30pm. She began by introducing several of the members present and thanking them for their service to AARO: the honorary members, advisors, and board members in attendance; Sally Sharpe, outgoing Treasurer; Debbie Chaskes, the health insurance chair; Alexandra Hughes, the events chair who organized the meeting; and Christine Cathrine, AARO’s office manager.

Since November 2014, AARO’s office has been housed in Reid Hall in Paris, after moving from the Mona Bismarck American Center for Art and Culture. The new location is more accessible for visitors and offers synergy with other groups in residence and nice spaces for events, such as the grande salle where the AGM was held.

AARO News is moving toward new horizons. When receiving the last newsletter, members were asked to choose whether they would like to continue to receive the paper version of the news, or if they prefer their AARO news exclusively online. The online version is now in full color and features live links for easy browsing.

In February 2015, Kathryn Peake joined the AARO team as communications manager, and has been working on making AARO’s name more well-known.

AARO’s prime concerns in the last year have been centered on overseas Americans’ loss of financial services, hefty reporting burdens, feelings of being unfairly targeted, and fear of steep penalties for reporting omissions and errors. These are the issues that AARO’s representatives took with them to Washington during Overseas Americans Week in March 2015.

New consequences to old problems have also become apparent. Lucy Laederich cited the example of Americans becoming easy targets abroad during times of unrest, due to their information being easily accessible as a result of FATCA reporting. This has notably been a concern with the recent upheavals in Yemen, but could also become an issue elsewhere. AARO will be focusing on this question in the coming months, and invites members to contribute suggestions as to how to take on this problem.

AARO has been in contact with the IRS regarding the closing of their overseas offices. While the IRS made it clear that there was no possibility of these offices remaining open, they were receptive to advice on how to best continue serving Americans abroad.

Despite these new problems, there have been some recent positive developments. In her annual report to Congress for 2014, National Taxpayer Advocate Nina Olson addressed certain issues specifically pertaining to Americans abroad. Some of her suggestions mirrored AARO’s: that filing of FATCA Form 8938 not be required of taxpayers who have timely filed FinCEN Form 114 (FBAR), and that accounts maintained in the country of a filer’s bona fide tax residence abroad not be considered “foreign” for the purposes of reporting by either a foreign financial institution or the individual him/herself. This is the first time that an individual inside the U.S. administration has defended AARO’s positions on financial reporting.

In addition to this, there has been some positive feedback from the letter writing campaign launched in early 2015. Many AARO members have received responses acknowledging the problems they highlighted in their letters, emails, and phone calls. It is indeed a positive thing when Americans abroad have their voices heard.

Changes on the AARO Board

Roberta Beardsley, the Nominations chair, presented two changes on the AARO Board of Directors. Sally Sharpe, who had served as Treasurer for nine years, decided to step down this year, with Jenifer Ereth volunteering to take her place. Sally Sharpe will remain on the board as assistant treasurer.

Marylou Daniels, already a member of the AARO board, was nominated VP of Communications.

Both nominations were approved unanimously.

Ellen Lebelle, VP of Administration, presented the Treasurer’s report. The total revenue in 2014 was completely in line with budgeted expectations, with less than a 0.2% difference. Several costs fell below the projected budget, including Advocacy, Information & Citizens’ services, Communications, Events, and PR Outreach.

Office operations costs were higher than budgeted because of AARO’s move to Reid Hall, where the rent is higher than the previous office at the Mona Bismarck Center.

The result in 2014 basically breaks even, with a modest surplus of 174 euros.

In the projected budget for 2015, there are no significant changes on the income side. Based on last year’s results, Advocacy, Information & Citizens’ services, Communications, and Events budgets have been reduced. The Office Operations budget was increased because of higher rent at AARO’s new location.

The 2015 budget represents a substantial loss, as was the case with the previous year’s budget. Ellen Lebelle pointed out, however, that the budget ended up breaking even in 2014. The budget accounts for projects that may not come about, but AARO prefers to keep the possibilities of these projects open. Furthermore, AARO’s excellent cash position represents over two years of expense. Therefore, if AARO manages to do all the planned projects for 2015, it is possible to draw on these substantial reserves.

The 2015 budget was approved unanimously. 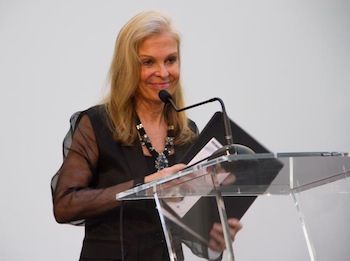 Following the conclusion of the business meeting, Lucy Laederich introduced the evening’s keynote speaker, The Honorable Jane Hartley, American Ambassador to the French Republic and the Principality of Monaco.

The ambassador spoke of the deep connections between France and the United States. She recently hosted an event for the departure of the reconstructed ship Hermione, and recalled that when General Lafayette returned to America on the original ship, George Washington cried tears of joy at his arrival. Since the earliest days—as early as the American Revolution—there has been a tradition of brotherhood and collaboration between the United States and France. The United States was of course instrumental in World War II, and today more Americans are buried in France than in any other nation outside of the U.S.

The partnership between these two countries persists today, and in many ways is stronger than ever. They collaborate extensively on security issues, and each is strongly involved in the other’s economy. The ambassador recounted that the United States is the lead investor in France, while France is the 5th largest investor in the U.S., and these partnerships are only growing.

This transatlantic partnership also extends to culture. Here, the ambassador emphasized that American citizens living abroad are also important ambassadors, fulfilling an important role in representing American culture. She concluded by saying she counts on us, U.S. citizens living abroad, in our unofficial capacity representing our country in France and around the world.