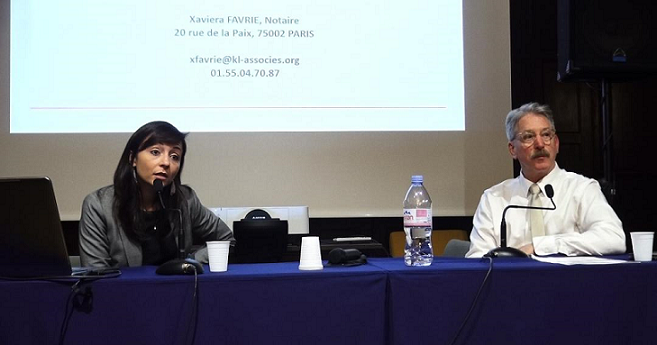 On October 18, AARO held its much awaited meeting on estate planning in France. If such meetings would be useful to members in other countries, AARO would be happy to help organize them. (Contact the AARO office at This email address is being protected from spambots. You need JavaScript enabled to view it..)

Tim Ramier, chair of the AARO tax committee, presented the American side of estate planning and Xaviera Favrie, notaire at K. L. Associés, presented the French side of the matter.

Changes from the US side

The exemption from Federal taxes does not affect state estate taxes. If you have an estate executed in the United States, it must be done in a state where you or the executor of the estate has some connection – a secondary residence or birthplace, for example.

The annual exclusion for gifts (per person per year) is now $15,000, up from $14,000 previously. These gifts are included in calculating the total lifetime gift and estate exemption. These gifts are exempt from US taxation but may create a tax liability in France.

Under US and French tax rules, gift transfers between spouses are totally exempt from US tax. There are some limits when a US spouse’s estate passes to a non-US spouse though, by treaty, a non-US French resident spouse is entitled to receive a marital exclusion equivalent to the life time exemption, $11,180,000 plus the life time exemption amount thus up to almost $22.4 million tax free. The limit of an annual excluded gift to a non-American spouse is currently $152,000 annually.

From the French side

To start, Xaviera explained what a notaire is. A notaire is a “public officer.” What they verify and sign is recognized as true. A notarial act, or deed, is, therefore, a true act, called an “acte authentique,” a document drafted and signed by the notaire and the clients, with the notarial seal embossed on the document.

In France, only a notaire can establish a property deed, which is then published in the Land Registry. Only a notaire can prepare a deed of heirship. When someone dies in France, a French notaire must be notified and will inform the family of the different administrative and tax liabilities, although they are free to consult with their own estate attorney.

The notaire also records the prenuptial contracts, “Matrimonial property regimes,” which are the first step in family estate planning. There are standard regimes, but the notaire can modify them to the specifications the couple may require. The property regime is the key to the succession

Married in one place, living in another, which law applies?

If there is a prenuptial contract, it applies.

To determine which law applies if there is no contract depends on several factors: the date of the marriage, the first habitual residence after the marriage (two years’ residence), nationalities.

Without a contract, the applicable law is that of the first common domicile (2 years) after the wedding. There is no automatic mutability allowed. Examples were given:

Without a contract, the general rule is the same as for marriages before 1 September 1992. However, exceptions are allowed.

With a prenuptial contract, the spouses may specify in their contract which law will be applicable and this law will apply to their entire property:

With a contract created during the marriage, which applies to their entire property and can apply retroactively to the date of their marriage, the law also permits a different choice for immovable property. They can choose:

International couples, couples with previous marriages and children often opted for this kind of contract after settling in France as it allowed them to escape the forced heirship to the children by contracting universal community for the immovable property in France.

Take note of the end date of this regime – 29 January 2019! It is important to act before that date if the couple wishes to apply universal community for immovable assets in France.

It will no longer be possible to create different provisions for certain property.

The spouses will be able to designate or change the law applicable to their property regime and make it retroactive to the date of the wedding.

The message was clear: have a contract.

Forced heirship is the rule. If the deceased was single, first, the children. Depending on how many children there are, they inherit between 50% and 75% of the estate. If there are no children, the parents inherit. Next in order are siblings, then nieces and nephews. If the deceased was married, the children inherit their share, but the surviving spouse usually has usufruct rights and the remaining share (at least 25%) full ownership. If the deceased had children from a previous relationship, the surviving spouse may only claim his or her 25% share.

Spouses may gift more to the survivor. However, the beneficiaries of forced heirship cannot be denied their share.

The matrimonial property regime is key to how a succession is handled. There are differences between US laws, dependent on the state in which the will is probated, and French law. Many US citizens living in France may choose to have their will executed in the US under US terms.

The EU regulation came into effect in August 2015, throughout Europe, except in the U.K., Ireland, and Denmark. It applies if the deceased was a habitual resident in Europe or if he or she owned assets in one of the member States of the EU. Without a will, the law of the last habitual residence is applicable to the entire estate. However, if the deceased had stronger connections to another country, then the law applicable there will apply. This can mean that the law of a non-EU country can apply when the last residence was not in Europe, even if there are assets in the EU This can be complicated in the case of international families.

When drafting a will, there is choice. According to the EU regulation, the person can choose the law of succession in the country of nationality. In the case of more than one nationality, he or she can choose which one. If you reside in France but you are American, you can choose for your will to be executed in a state of the US. (There must be some connection to the state: you were born there, you own property there, or your designated executor lives there, for example.) This can be a means to bypass the forced heirship issue if the habitual residence is not in France, but there are assets, such as a vacation home, in France.

Wills that predate this 2015 regulation, that were drawn up in the United States, for example, are valid as fulfilling the nationality choice.

This article is contributed by AARO member Ellen Lebelle