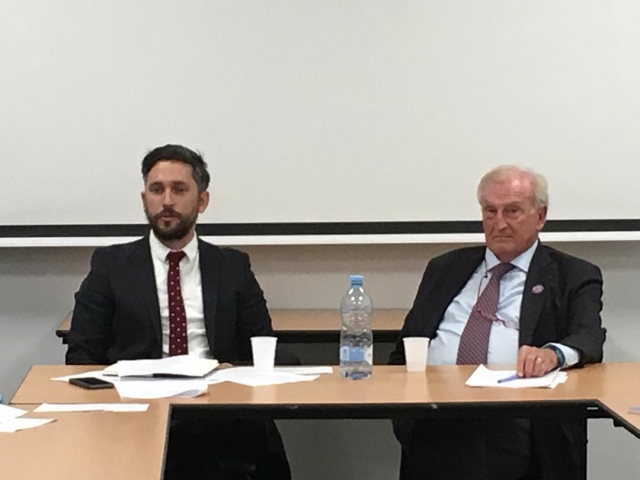 Ferauge prefaced the debate with a short talk about the AARO Midterm Election Project. Earlier this year AARO volunteers sent over 500 invitations to all the congressional candidates in nine key states asking them to answer three questions concerning taxation, services, and banking, and to send a personal message to their overseas constituents. Nearly 50 candidates have responded. You can read their answers here.

Each party representative had 20 minutes to present an opening statement, followed by a 5-minute rebuttal for each side, and then the moderator opened the floor for questions from the audience.

The Vice Chair of Democrats Abroad France, Jonathon Holler from San Antonio, Texas who has been living in Paris for seven years and works in Public Relations with the Vae Solis Corporation went first.

Higher costs and lower income: Since the late 80s and 90s, the cost of living has increased while income has stagnated, not seeing an increase since the 1970s; minimum wage is 24% lower than in 1965; childcare costs ten times as much; healthcare twice as much; and college tuition three times as much compared to 1970. Unemployed people cannot support their families, and Holler argued that the next generation will be worse off than today.

GDP: Growth continues as wealth is concentrated in the hands of the few: From 1935 to 1980, the lower 90% of earners have received only 70% of all income growth. Since 1980, 0% of income growth has gone to that 90% of Americans. Seven members of the Walton (Walmart) family own more wealth than the bottom 40% of the American people.

Student debt: Student loans are the second biggest source of debt in the US. Americans owe over 1.48 trillion dollars in debt. There are 44.2 million Americans with student loan debt. The average monthly student loan payment is $351. For a student making minimum wage that represents 28% of their income.

Financial crisis: The highest concentration of wealth is amongst the top 1% of Americans. The average American worker is not receiving a higher income, which creates a tax division between the wealthy, the middle class, and the poor. The Republican agenda is to disarm regulatory authorizations.

Tax cuts for the wealthy and corporations will add more than a trillion dollars to the deficit over the next 10 years, which will make it harder to fund a safety net. Mitch McConnell and Paul Ryan are already citing the deficit as a reason to make cuts to Social Security, Medicare, and Medicaid.

Campaign Contributions and Voting Rights: A top House priority is to reign in the influence of money in politics and expand voting rights in the US. The Democratic Reform Task Force proposes cracking down on PAC money by providing a 6-1 match for every small donation to candidates who agreed to forgo PAC money. The Clean Politics Act aims to close lobbying loopholes and cut down on campaign contributions from lobbyists.

Collective Bargaining: Democrats also aim to strengthen workers’ freedom to negotiate better deals such as higher wages and better working conditions; ban state laws that undermine worker freedoms to join together and negotiate; provide millions of public employees with the freedom to join a union and collectively bargain with their employers.

Health Care: Protect the Affordable Care Act by ensuring that those with pre-existing conditions can get health insurance. Drug companies that drastically increase prices will be forced to justify their actions to the HHS. Enable the government to negotiate drug prices for Medicare.

Banking: Overseas Americans not able to open bank accounts in the US are treated as if they were putting their money in tax havens. They are also being rejected by foreign banks to open an account. Foreign banks do not want problems with the US government.

Services and Banking: Overseas residents, in addition to going digital, also need to have the opportunity for human exchange, especially for elder citizens. And there should be a guarantees that sensitive information will be protected and that nonresident US citizens can open accounts in a federally licensed bank, wherever he/she may choose in the US.

George Yates, Vice President of Republicans Overseas and a 30-year resident of Europe, opened by arguing that the American Dream as we know it is still here when people come to the US legally, not by slipping across the border. It is not feasible to accept everyone into the US today.

President Trump, he said, is the only president who stands for what he promised during his campaign: withdrawal from the Paris Climate Agreement, lower taxes, stopping immigration, and focusing on workers to reduce unemployment which is the lowest since 1989.

Student debt: Yates agrees that student debt is a big problem, but an increasing number of students don’t need to go to university. The workplace has changed and more students have dropped out. Example: Harvard University has more dropouts than graduates. Subjects such as philosophy, Greek and Latin are not helping today’s students.

Government: Democrats still believe that government should be bigger and take care of the individual. The biggest disgrace has been keeping Black Americans down through government programs.

Healthcare in the US is not important to those living abroad. In the US, it costs 35 trillion dollars to provide healthcare. Do Americans abroad really want to pay for someone else’s health care? The US government could go bankrupt.

Corruption: Campaign spending is not the root of it. Most Senators and Representatives report their campaign contributions. It is fundamental for companies to declare what candidates they are funding.

FATCA: There is an anti-FATCA group led by the US Republican party members.

Caravan Migrants from Honduras and Mexico: Right now, they are 1000 miles from the border. Trump should send troops to control the border.

Yates: Republicans and Democrats should work together. Democratic Senator Ron Tester, in red state Montana, is someone who reaches across the aisle, as well as Democratic Senator Joe Manchin from West Virginia. We need a war or a terrible crisis, something to wake up the people.

Holler: Education is important. We must educate Americans about how the government works, how legislation happens, and how it affects our lives.

This article was contributed by Chilla Heuser