Wreaths Across America at the Normandy American Military Cemetery 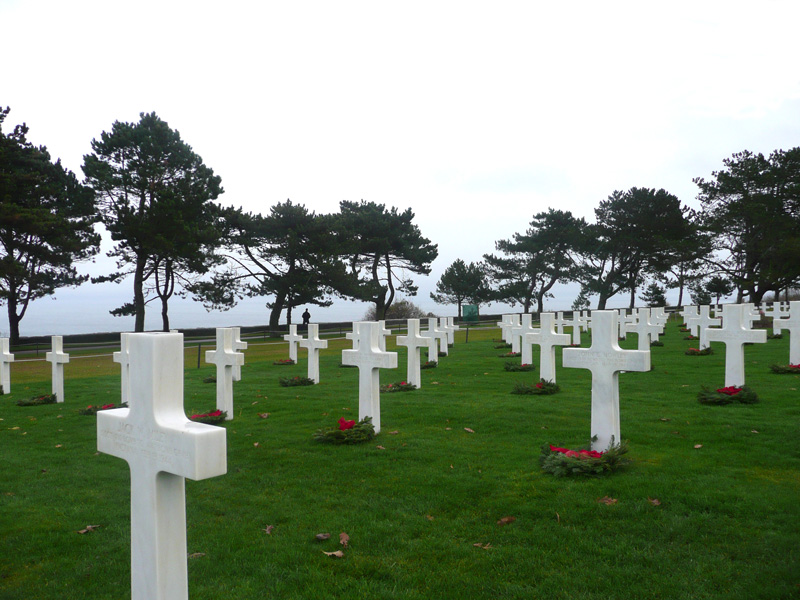 On a cold, windy day on the first of December 2018, AARO members joined military and civilian volunteers to lay over 9,000 wreaths from the state of Maine, candles, and stones at the Normandy American Cemetery in Colleville-sur-Mer, France.

Volunteers came from US states as diverse as Kansas, Maine, Texas, and Maryland, and from countries like Ireland, France, Germany, and the Netherlands. They came to honor the fallen with wreaths before the Latin Cross headstones, stones before the Star of David headstones, and candles, and to speak their names out loud so that these American World War II soldiers who fell in France will not be forgotten.

It all began in 1992, when the Worcester Wreath Company of Harrington, Maine began to donate wreaths for veterans’ graves in less-visited parts of the Arlington National Cemetery in Virginia. In 2005, Morrill Worcester’s annual generosity gained national attention, and there were calls to expand to other military cemeteries around the United States.

Thus, the non-profit Wreaths Across America was born, and is now a national phenomenon in the US. In 2014, volunteers lay 226,500 wreaths at the Arlington National Cemetery and over 700,000 in 1,000 locations around the United States. 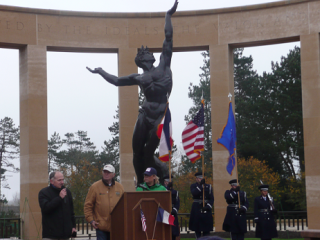 Scott Desjardins, Morrill Worcester, Renee Worcester, and Honor Guard. Photo by Victoria Ferauge 2018 is the first year Wreaths Across America has come to Europe. Morrill Worcester and volunteers from the US accompanied the more than 9,000 donated wreaths to lay at the base of every soldier’s grave in the cemetery overlooking Omaha Beach. The French association US Memory Normandy donated the candles.

In a chilling wind and occasional rain, American veterans of conflicts like Afghanistan and Iraq worked alongside French veterans, and French and American civilians.

Volunteers walked down each row, laying a wreath (or stone) before the headstone, placing the candle carefully to the left, and then standing and pronouncing the name of the fallen American soldier. The Young French Firefighters (Jeunes Sapeurs-Pompiers) added a moving gesture: after speaking the soldier’s name, they added, “Mort pour la France.” (“Died for France.”)

As the last wreaths were being laid, AARO Board members Mark Levinson and Victoria Ferauge took the opportunity to shake hands with Mr. Worcester and to thank him and his volunteers for the work they do, and for welcoming the American community abroad to be a part of this historic occasion. 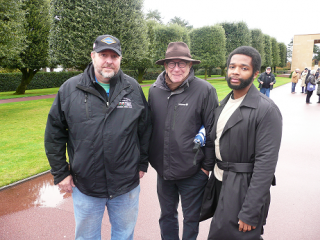 The day ended with speeches, a benediction, and a laying of wreaths by representatives from each branch of the American military, as well as one from the French community of Colleville-sur-Mer.

As the sun went down over the cemetery a bugler played Taps while the French and American flags came down together, a powerful symbol of the enduring alliance between the two nations.

In his closing ceremony, Mr. Worcester expressed his gratitude for all who made the event possible and assured us that, although this was the first time that Wreaths Across America came to Normandy, it would not be the last.

We at AARO take that as a promise, and we support this new tradition that promotes a value that Americans at home and abroad share: honoring those who gave their lives so that this and future generations can live in peace and freedom.

If any AARO members in the US would like to join AARO Board member Kathleen Davis Mistry at the Wreaths Across America event at the Arlington National Cemetery on December 15, please let us know at This email address is being protected from spambots. You need JavaScript enabled to view it..

For AARO members around the world who cannot attend one of the ceremonies that day, click here to sponsor a wreath for a veteran's grave at a cemetery of your choice.

This article is contributed by Victoria Ferauge.