Democrats and Republicans Together for the End of Citizenship-Based Taxation 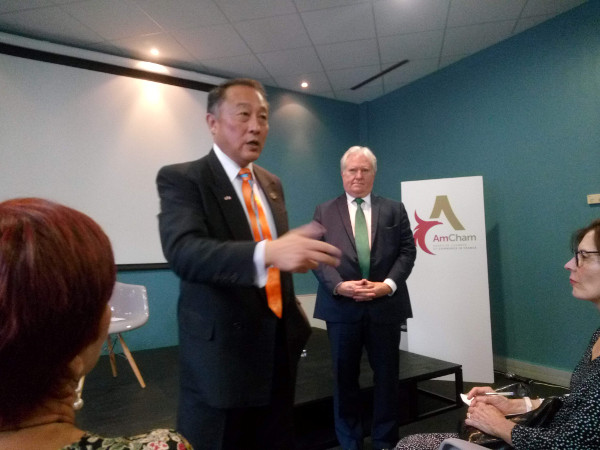 On September 21st Joe Smallhoover, board member of the American Chamber of Commerce France and Chair of Democrats Abroad France (DAF), and Solomon Yue, founder of Republicans Overseas (RO), presented the draft bill on territorial taxation for individuals (TTFI) at the American Chamber of Commerce France in Paris.This bill will be presented to Congress this fall, before the end of this session.

Yue began the presentation by saying how much territorial taxation for individuals (TTFI) — also known as residence-based taxation (RBT) — is an American issue, not a Republican, Democrat or Independent issue.

When the U.S. Congress tackled tax reform in 2017, the bill (“Tax Reform 1.0") was sped through Congress so fast that it did not include any form of residential or territorial taxation for individuals. The Joint Committee on Taxation (JCT) did not have sufficient time to score the section concerning TTFI, although, the House Ways and Means Chairman Kevin Brady did allow Representative George Holding five minutes to broach the matter. But lawmakers promised to correct the oversight in a later bill.

Now, TTFI legislation is scheduled to be introduced this fall. However, this time Representative Holding will present a bill that is separate from the "Tax reform 2.0" package: this bill will be solely about territorial taxation for individuals. Smallhoover pointed out that this TTFI bill corresponds to residence-based taxation.

Drafters of the bill refer to it as the “Saving American Citizenship Act.” Republicans Overseas became involved in pushing for TTFI when during the litigation against the Foreign Account Tax Compliance Act (FATCA), they realized that the core problem was citizenship-based taxation (CBT).

What is in this proposed bill?

U.S. citizens would no longer be taxable on foreign earned income if they show three years of tax compliance. Furthermore, U.S. citizens coming into compliance with the U.S. tax system could do so without FATCA and Foreign Bank Account Report (FBAR) penalties.

The result, said Yue and Smallhoover, could be to eliminate the FATCA problem, too, since TTFI qualified U.S. citizens abroad can pressure banks in their countries of residence to not file FATCA reports with the U.S. government, because U.S. citizens living abroad would no longer pay U.S. taxes and file U.S. tax returns.

What about the "Accidental Americans" who are not compliant because they were not aware of their U.S. citizenship and/or their fiscal obligations? The presenters suggested that they could be exempted if most of these “Accidentals” are from high-tax countries and would, therefore, owe no U.S. tax.

Yue briefly reviewed the case of Daniel Kuettel who renounced his U.S. citizenship when banks in his country of residence (Switzerland) refused to grant mortgages to U.S. citizens. His American daughter was not allowed to open a savings account. Swiss banks discriminate against those with U.S. citizenship and today Kuettel's daughter is not able to open a basic account available to other children residing in that country.

The TTFI bill would take into account U.S. citizen children who live overseas like Kuettel's daughter. Upon turning 18, they would be deemed TTFI qualified. Thus, said the presenters, they would no longer be pressured to renounce their citizenship. In fact, no TTFI qualified American would continue to feel this pressure.

One of the provisions of the 2017 tax reform is the Transition Tax. (See the AARO article Repatriation and GILTI Taxes for Professionals and Small Business Owners and subsequent articles for more detail about the Transition Tax and GILTI). This new tax concerns business owners and it was meant to allow U.S. corporations to bring their foreign earned profits to the United States without being penalized. However, the bill did not take into account U.S. citizens who live overseas and who own local businesses in their country of residence.

Headway on the Transition Tax extension has been made: the IRS granted a first extension to June 15, 2018, and then the second extension to June 15, 2019. The idea is to use TTFI to connect with Territorial Taxation for Corporations first as a “Trojan horse”, Mr. Smallhoover said, to end citizenship-based taxation. The next bill will fix the Transition Tax and GILTI problem for individual business owners living outside the U.S.

During the Question & Answer period, there were some specific numbers given concerning thresholds and how those with U.S. income would be affected. As a TTFI qualified non-resident taxpayer, Americans living outside the U.S. will still have to pay taxes to the IRS on their U.S. source income even though they are residing abroad; some examples are Social Security income, U.S. rental income, and interest income from U.S. bank accounts in the U.S. However, every American abroad would have a choice to stay with citizenship-based taxation or to elect TTFI qualified non-resident taxpayer status.

On the whole, the presentation was well-received and the audience applauded the RO-DA collaborative work on the bill. Yue and Smallhoover thanked all the contributors to this effort: organizations such as AARO (whose president Neil Kearney was present) and American Citizens Abroad (ACA), who raised points that needed inclusion in the bill; and the lobbies that have added their support. Yue also pointed out how important a role John Richardson, an independent tax and citizenship lawyer from Ontario, Canada has been in identifying and formulating the problems and solutions.

The legislators who will be voting on territorial taxation for individuals are influenced by votes, donations, and organizations. Americans abroad are 9 million strong. To get our issues on the agenda, we need to VOTE!

This article is contributed by AARO member Ellen Lebelle.