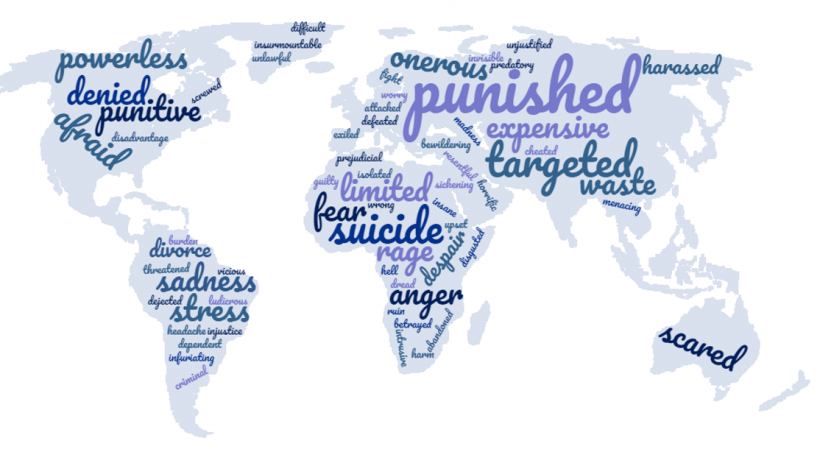 This is a sampling of the words survey participants used in describing their experiences
with the extraterritorial application of U.S. taxation and banking polices.

From late October until mid-December 2020, Stop Extraterritorial American Taxation (SEAT) carried out a study to better understand the effects of the extraterritorial application of U.S. taxation and banking policies on persons living overseas. The study was conducted in the form of a survey open to current and former U.S. citizens and green card holders, as well as their spouses and partners, living outside the United States.

AARO, as well as other organizations such as the Association of Accidental Americans (AAA), helped to publicize the survey.

Participants from Every U.S. State, Living Around the World

A total of 1564 persons participated in the survey. The participants include persons from every state in the United States, living in 68 different countries around the world. Certain states as well as certain countries are more represented than others. This representation reflects, on the one hand, the larger populations of certain states (California, New York, Pennsylvania, Texas, Florida, Illinois, Washington, Virginia, Massachusetts, Maryland) and, on the other hand, the countries with the larger concentrations of American emigrants (Canada, Australia, United Kingdom, France, Germany, New Zealand).

The report contains a data visualization dashboard. This allows users to explore selected participant comments in an interactive manner based upon subject matter, the state where the participant is from (if any), and the country where they live.

Drill-Down by State and Country

The report presents all the survey participant comments in three different versions, organized by: (i) topic, (ii) the state where the participant is from (again, if any), and (iii) the country where the participant lives. Organizing the comments in these multiple formats allows users quick access to the comments in which they are the most interested. Notably, this should assist those seeking to refer to this material in communications with policymakers both inside and outside the United States, because the experiences of persons connected to a given state or country can be quickly identified and shared with the relevant policymaker(s).

The report presents the experiences of multiple stakeholders, including not only those who identify as American (and who have resided outside the United States for longer or shorter periods), but also their non-American spouses, Accidental Americans, and those who have renounced U.S. citizenship.  It also presents experiences with respect to business ownership, as well as the experiences that Americans living overseas have when interacting with the IRS. This allows for a better understanding of the full impact of the extraterritorial application of U.S. taxation and banking policies on different kinds of people, including those who are no longer or never were U.S. citizens.

SEAT’s survey report can be accessed at this link.

Stop Extraterritorial American Taxation (SEAT) is an international, independent, non-partisan not-for-profit association based in France. The mission of SEAT is to provide an educational platform for individuals, policymakers, academics, and professionals about the effects of U.S. extraterritorial taxation.