Lucy Stensland Laederich, a great pillar of AARO and other organisations serving overseas Americans, passed away peacefully at home with her family in Bordeaux, France on February 1st.

Tirelessly working to improve the lives of Americans Abroad, Lucy served as President of AARO from 2012 to 2016. When I succeeded her, Lucy was already losing her battle with cancer, but she insisted upon keeping her oar in the water as Vice President of Communications.

A relative newcomer to AARO, I struggled to learn the ropes of a presidency she had worn smooth with nimble hands. Deftly deferential, she would not tell me what to do. But she always listened, shared insights and gave wise counsel.

Accolades have poured in from many organizations. Sallie Chaballier, who followed Lucy’s footsteps as president of FAWCO (Federation of American Women Clubs Overseas), posted this on Facebook:

“Lucy was an institution, an icon, a role model, mentor and inspiration to countless people. She was a resolute leader, an articulate and competent advocate, a brilliant thinker.... To many of us in FAWCO (as well as my home club, AAWE Paris, where she also served as President), she was a cherished friend as well.

Lucy’s unstinting advocacy for overseas Americans made her greatly admired and appreciated far beyond FAWCO. She was instrumental in setting up the Americans Abroad Caucus in Congress, and was the motor behind establishing the annual Overseas Americans Week [in partnership with AARO]."

“Lucy was a fierce and devoted advocate who worked to ensure Americans living overseas in all corners of the world could participate in U.S. elections. Through her service with the Association of Americans Resident Overseas, Paris, as well as The Federation of American Women’s Clubs Overseas, Lucy brought together U.S. voters living abroad with the information and resources needed to fully participate in our democracy. While she spent her time in Paris, her advocacy had no borders and her work impacted civilian Americans across the globe. I am grateful to have had the opportunity to work with Lucy during her exemplary career, and her efforts leave a legacy of election access that each of us should emulate.” 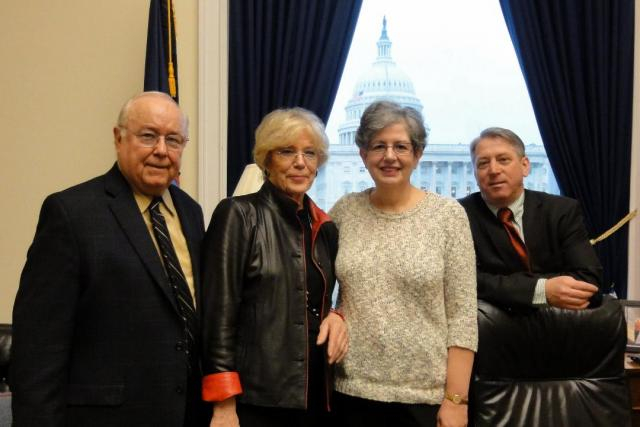 Born to a Swedish-American couple, perhaps Lucy was destined to shine in international circles. She studied in New York, Saskatoon, Seattle, and Berkeley before settling down in France. One of things that impressed me the most was her passion to help in so many different areas: voting rights, citizenship, taxation, banking, security, gender equality, etc. You name it and she had the answer -- or the determination to find the answer. It was no coincidence that she set up AARO’s “Ask an Expert” program which has helped out many of our members.

The loss of Lucy Laederich has left a void that we can best fill by continuing her legacy of helping Americans abroad. The Japanese have a term, mono no aware, which can be translated as “the pathos of evanescence”. The love of life comes with the sureness of death as, for example, in the celebrated cherry blossoms. They bud, and then thrill us with their beauty, only to be gone too soon. Lucy was one hell of a blossom, a great example to us all.

This article is contributed by AARO President Neil Kearney